REDWOOD PRESS
“The music is as real and as raw as anything they have ever recorded and for that I am truly grateful. Here is a band that shows no sign of letting up and if ever their was a case of quality AND quantity then Lexington Field have it in spades!”
LONDON CELTIC PUNKS

“Everything is played with a lot of power and to the point...Within the tracks often change pace and characteristics, yet each song has its own color.“
CELTIC-ROCK.DE  **Translated from German**

“Having followed the band since their early days I am again happy to say that Greenwood has hit the spot nicely. Thirteen tracks and forty minutes gives the songs plenty of time to develop and Beau’s great vocals and lyrics stand out as usual giving Lexington Field that extra bit more.”
LONDON CELTIC PUNKS

“Full of energy that will remind you of Flogging Molly or The Mahones.  13 tracks that will fit into your mood.”
MPTY ZINE

“I’d describe the overall experience of listening to this one for the past few weeks as really fun. I think there’s a lot of that to be had here and you’d seriously be missing out if you didn’t pick this one up.”
NINE BULLETS

“Greenwood is so tight and masterfully performed that I am still in awe months later – and it is just as good live! This is by far the strongest and best iteration of Lexington Field that has ever been PERIOD!”
PADDY ROCK

“A musical journey through the traditions of modernity, re-voiced in the elements of bluegrass, punk and folk. Strong, fast and irresistible! Shun the spotlight, live the dream!”
UNDERDOG FANZINE   **Translated from German** 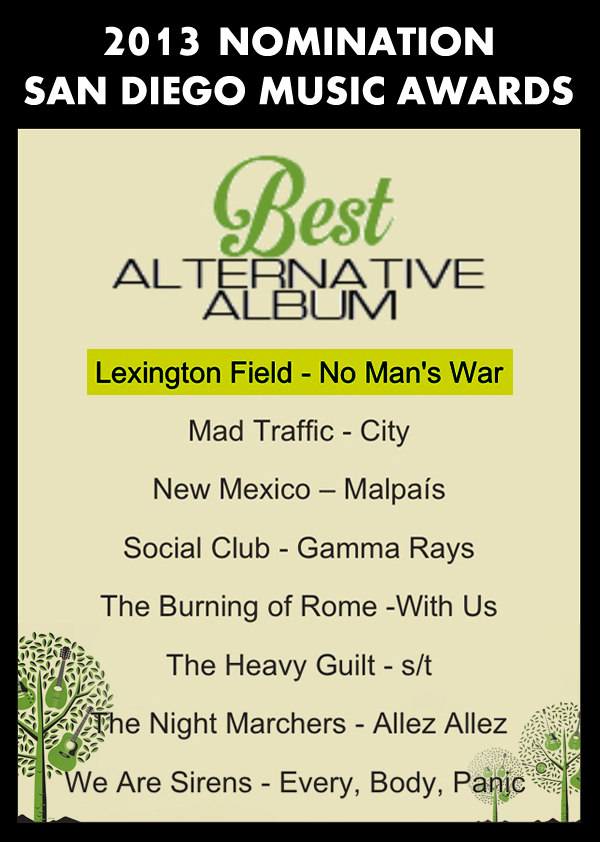 “No Man’s War, their latest CD, is an artistic triumph.”
67 MUSIC

“They have their own unique style and sound, and their performance is superior.”
THE CELTIC CRIER

“Lexington Field’s new CD is a present to any music fan.”
CELTIC-FOLK-PUNK

“As the owner of the two previous albums, this is of course the next “must have” for the collection”
CELTIC-ROCK.DE  **Translated from German** 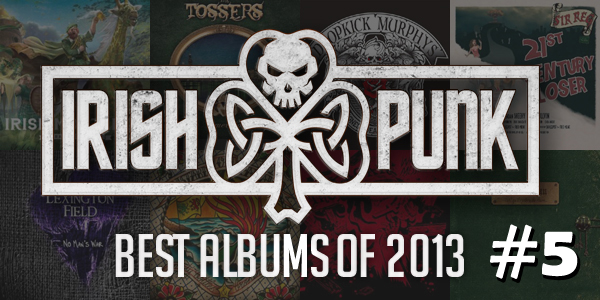 “I love No Man’s War. I hope you do too. It seduces a listener to get hold of every  Lexington Field release.”
CELTIC MUSIC FAN

“If you aren’t yet a fan of fiddle rock, check this album out and you soon will be.”
FANREALM

“The fact is that the greatest strength of this album lies precisely in the volatile, well-written songs.”
FOLKOWA  **Translated from Polish**

“No Man’s War is an album made to last, and is already a staple of the year. Good job lads!”
FORCES PARALLELES  **Translated from French** 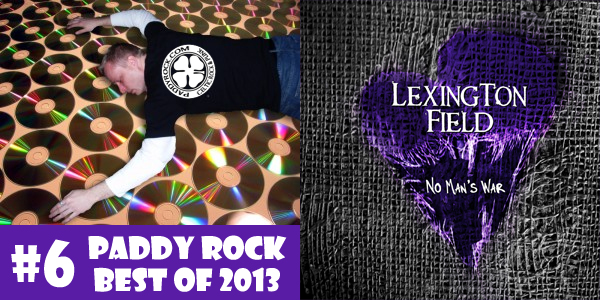 “No Man’s War is an album filled with emotional rocking songs. Fourteen of them, so you certainly won’t feel cheated.”
INCOGNITO

“Lexington Field is a band whose career is following the trajectory of a water balloon. The more they put into it in shows and releases, the bigger it swells, fuller and fuller, until one day, probably not so far from now, they will be ready to burst upon the scene and saturate it in a way precious few Celtic punkers have.”
IRISH PUNK

“A breath of fresh air on the San Diego music scene.”
LISTENLOCALSD 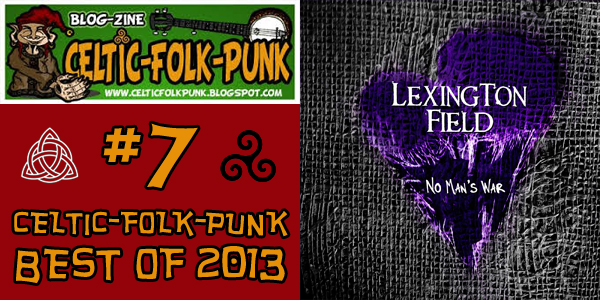 “I actually like Lexington Field, where they seem to be a band that really has something to say”
LUKINZINE **Translated from Swedish**

“Lexington Field put their blood, sweat, and tears into ‘No Man’s War’ and it shows from the first track to it’s last.”
PADDY ROCK

“From rather sad to melancholy, or in high spirits , sometimes even almost contemplative and worn effect , there are on the “No Man’s War ” to discover a veritable potpourri of different moods”
PLASTIC BOMB **Translated from German**

“A unique blend of Irish folk with an aggressive punk sound that never strays far from outright rocking and rolling.”
POPA’S TUNES

“If you’re a fan of fiddle focused rock and have yet to be introduced to San Diego quintet Lexington Field then it’s high time they were added to the list of new and noteworthy folk acts on today’s circuit.”
THE PUNK SITE

“A very diverse and well-made album, which should be enough for more than a moderate success.” 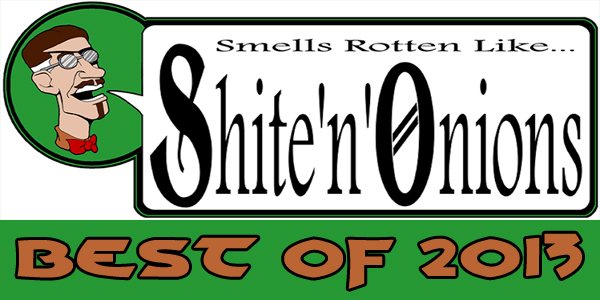 “This album is my favorite of the year so far, and I had really high expectations.”
ROCKING THE CRAIC

“No Man’s War shows that Lexington Field has a big sound, is full of surprises, and is ready for battle.”
SAN DIEGO TROUBADOUR

“Lexington Field bring together on top of a big rock’n’roll sound, Celtic, bluegrass, Americana and folk and just a touch of punk to produce a very fine album with its own individual stamp in an often overcrowd field.”
SHITE N’ ONIONS

“Overall a very diverse album, expressive and emotional, exciting and with strong accents, understand the relationships with themselves and the environment as a defining challenge, even if we should break it.”
UNDERDOG FANZINE   **Translated from German**

“What a command performance Lexington Field delivers in their latest CD, “Poor Troubled Life”. Their enthusiasm for their music astounds me…it is infectious, exciting and inspiring!”
THE CELTIC CRIER

“Poor Troubled Life is a 6 track EP that shows the different “corners” of our favourite band.”
CELTIC-FOLK-PUNK

“There’s a lot of variety on this EP and it really showcases the talent of this band. In addition to the great music, the cover is really beautiful. I seldom comment on the artwork on an album but this is really breathtakingly. Celtic Punk, rock and fiddle fans will definitely want this one in their collection.”
FANREALM

4 out of 5 stars!
“While Old Dirt Road laid the groundwork for a Celtic punk friendly though lacking personality, Poor Troubled Life marks a step forward in the band’s career.”
FORCES PARALLELES  **Translated from French**

“Simply kick ass Celtic Punk Rock at it’s best and will have you bouncing around at your house, pub, festival, or any paddy punk party.”
PADDY ROCK

“Musically well crafted and great lyrics are a staple on the EP culminating in the title track that I can see getting a lot of play from me.”
ROCKING THE CRAIC

“Not a bad track in sight”
SHITE N’ ONIONS

“Lexington Field performs with tremendous enthusiasm in their CD, Old Dirt Road! My first love will always be with traditional Irish music, maybe because of my age, but when I hear bands like Lexington Field throw in a mix of rock, along with a fiddle, I can’t help but enjoy the sound. The mix of rock and Celtic in Old Dirt Road is done to perfection and is not a mix that is easily mastered.”
THE CELTIC CRIER

“This debut album features punk-pop (“Duke of the Green”, “Up in the Sky”), British style folk punk (“The Shores of Maine”), American folk (“Weather Heart”, “Old Dirt Road”), jigs and reels (“The Toledo Tapper”, “Laurel’s Reels”), and Celtic punk (”Holes in Our Hearts”, “Tracy Boys Fight the World”). In other words, an eclectic and attractive album.”
CELTIC-FOLK-PUNK

“Again and again I find myself in the use of various air tools (air guitar and air drums) to the energy that blows into my ear, reduce. What else should I write? The board is great, strong buy recommendation.”
CELTIC-ROCK.DE  **Translated from German**

“With their first full length CD, Old Dirt Road, Celtic Punk group Lexington Field is throwing their hat in the ring with Flogging Molly and Dropkick Murphys. Although they don’t tend to stand out from the established Folk Punk crowd, they certainly step in the door with some tricks up their sleeve.”
CELTIC RADIO

“Old Dirt Road, the first album, nothing is lacking, from production to performance. LEXINGTON FIELD offers an album of folk-punk without much personality of course (it will probably come on the next achievement), but with a real desire to do battle and to honor this style that deserves it.”
FORCES PARALLELES  **Translated from French**

“A very strong debut and very well produced – big rock with a punk energy and loads of fiddles that merge the rock with Celtic, Americana and country.”
SHITE N’ ONIONS