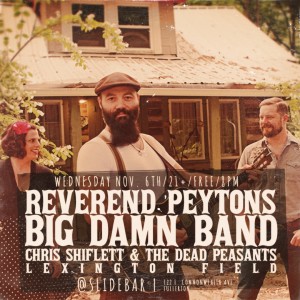 I hope you all are as excited as we are this week!  We have two awesome shows on the books!!  First, we return to our favorite venue in Fullerton, The Slidebar, tomorrow night (Wednesday, November 6) to open for REVEREND PEYTON’S BIG DAMN BAND!  Also playing is CHRIS SHIFLETT (guitarist of Foo Fighters & No Use For A Name) & THE DEAD PEASANTS!!!  We are huge fans of both these acts so it’s a pretty big deal to get to share the stage with them.  Then, on Friday (November 8) we make our debut appearance at Seven Grand in North Park.  It is a very cool whiskey bar that has gotten some great reviews.  So, if you live in Orange County or San Diego County, we have got you covered this week!  On top of all that, we head back to Clarity Recordings on Sunday to track a new song for a holiday release, more on that later…